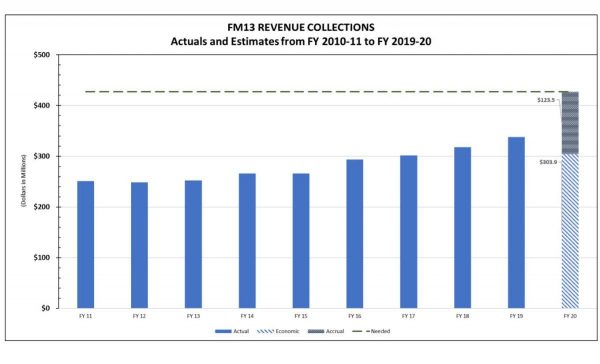 Collections of $427.4 million are needed, and assuming a 10 percent activity in Sales and License taxes for June, only $123.5 million in revenue from the extended income tax filings is needed to meet estimates.

Currently, the RFA office anticipates $308 million from income taxes filed through the July 15 extension. Based on these figures, the general fund could see a surplus of roughly $220 million for FY19-20. (Previous estimates had the surplus at $40 million.)

While general funds fared well, the Education Improvement Act (EIA) funds will likely have a shortfall of $10-$20 million.

Lottery revenues came in over original estimates and are one of the few things that weren’t impacted by COVID-19. Revenues through June totaled $492.8 million, which exceeded the estimate by $25.5 million.

Overall, SC appears to have made it through the year in good shape. The state’s books will not officially close until early August once the Comptroller General certifies all of the revenues.

Rainwater cautioned that there is a lot of uncertainty going forward, making forecasting for the current fiscal year difficult.

Federal stimulus monies helped offset shortfalls in FY19-20, and while Congress may issue another round of stimulus, it is unlikely that it will be another $3 trillion package. This will need to be taken into consideration as well as business response and consumer behaviors moving forward.

So what would help the economy the most? “A vaccine is the best solution,” said Rainwater.

The BEA will meet again next month to provide the final numbers for FY19-20 and begin work on budget forecasts for the legislature. The legislature will return in September to take up unfinished business, COVID-related matters, and pass a budget for the current fiscal year.

A full copy of Thursday’s presentation can be viewed here.