The NCGA is in session today through the 18th but there will be no votes taken. Senator Phil Berger confirmed last week that he also does not want to have a voting session in December stating “I think I’m gonna go tell Santa Claus what my wishes are for Christmas rather than spending time with my friend.”

Members of NCGo!, including CRMCA member Greg Dean and CRMCA lobbyist Cady Thomas, met with Senators Vickie Sawyer, Tom McInnis, and Mike Woodard this week to discuss continued revenue sources for NCDOT. It was a good meeting and we look forward to working with them in the 2023 legislative session. 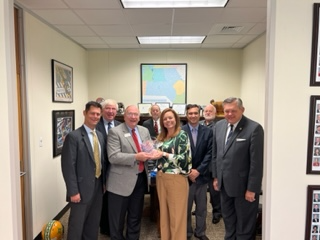 The entire NC General Assembly, one US Senate and 14 US Congress seats were on the ballot tonight in NC. The Council of State (including the governor) is not on the ballot again until 2024.

The NC Congressional delegation is now evenly divided between Democrats and Republicans. We anticipate these districts to be redrawn in advance of the 2024 elections as the current maps were decided by the NC courts.

The NC House partisan divide is now 71 R and 49 D and the NC Senate is now 30 R and 20 D. The NC Senate gained a Republican supermajority, but the House was unable to do the same. Therefore, Governor Cooper’s veto remains relevant.

NC gained a new congressional seat this election. The partisan split is now 7 Democrats and 7 Republicans. District 13 was the only toss up race and was won by Democrat Wiley Nickel.

New Members of the General Assembly

Opponents Can Be Friends

Political rivals that were actually friends used to be common in government. Senator Thom Tills and Cal Cunningham provide a glimpse of civility after a hard fight.