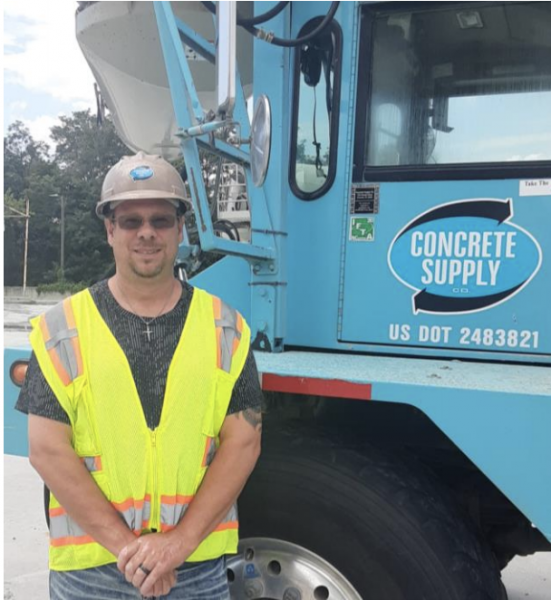 The National Ready Mixed Concrete Association (NRMCA) has named Shane Mayberry, from Mooresville, North Carolina as the recipient of its 4th Annual Safety Award. Mr. Mayberry is the Statesville and Mooresville Plant Manager for Concrete Supply Company. Mr. Mayberry was named the 2020 award recipient for his more than 20 years of safety leadership in the industry. NRMCA’s Annual Safety Award acknowledges the significant contribution that safe work practices give to the growth and success of individuals and individual companies and the ready mixed concrete industry as a whole.

The NRMCA Annual Safety Award is presented to an individual or company whose actions represent the very highest in the advancement of safety in the ready mixed concrete industry. The award program is generously sponsored by the Truck Mixer Manufacturers Bureau (TMMB).

Concrete Supply Company Director of Safety, Scott Karriker said, “Shane’s historical work as a professional mixer truck driver, batcher, and dispatcher have afforded him the experience to know the duties and challenges of each of these positions. Throughout Shane’s management career he has been a champion of safety and puts it as priority #1 before all else. This safety-first attitude is not by words alone, but rather actions and results. Shane believes in employee participation and buy-in, and frequently asks drivers to share near miss or even accident experiences with other plant personnel during routine safety meetings.”

During the past four years Shane’s team has had no lost time accidents. This is a collection of 133,494 hours worked and 30,292 concrete loads hauled. Mr. Mayberry’s plants have been recognized for their outstanding safety records by the North Carolina Department of Labor, the National Ready Mixed Concrete Association’s Safety Contest, and the Carolinas Ready Mixed Concrete Association Shane is, in part, also credited with the success of Concrete Supply’s newly installed onboard camera systems and promoted them in a way that highlighted their benefit to the drivers.

Since the inception of this program at Concrete Supply Company, Shane has always maintained a 95% coaching effectiveness rating (no repeat behavior for at least 60 days after coaching occurs) and has always had one of the shortest lag times for coaching, 3 days, within the organization. Mr. Karriker also said, “More than once over the past few years Shane has been called upon to travel elsewhere for extended periods of time to help put out those “fires” we all experience at various points in our careers.

Shane has always tackled these projects with a positive attitude and puts forth the same efforts and expectations in those projects as he does in his day to day plant operations. In recognition of this, Shane received the Leadership Award for Concrete Supply Co. in February 2019 for his help and leadership throughout the company. The common theme you will always hear with Shane at work is that safety is the number one priority. His employees hear him say this, those he reports to hear him say this, and the customers hear it as well.

Concrete Supply Company President, Henry Batten said, “Shane is one of those individuals who exemplify leadership, compassion, empathy and accountability. His quiet, unassuming mentorship and leadership clearly make us a safer organization. He has assumed a distinct leadership role within our company such that we can use his skills to develop, grow and mentor others to continually improve our safety performance and ensure we are creating capable and empowered future leaders.”